When I was a kid, I never got to go to camp like some people remember doing. When we went camping, it involved putting an old mattress in the back of Dad’s truck and sleeping under the stars, usually at Arroyo Seco. A weekend adventure for this farm boy raised in Aromas was to go to Pacific Grove to see Uncle Dick at the Pt. Pinos Lighthouse, though he was retired by then. One of the guys at school bragged about church camp, but when you go to a two-room school out in the country, odds are none of your friends went to Boy Scout Camp let alone Nature Camp.

Nobody ever heard of Foodie Camp.

Asilomar’s Harvest Camp for Foodies has got to be the most under-advertised, food-filled, relaxing self improvement weekend I ever heard of. Al Saxe talked us into going, having attended the last one a few months ago himself, so Her Editorness and I hiked the few blocks down to Asilomar and turned ourselves over to the chefs and sous chefs and various experts on hand to learn all about autumn harvest cooking. Where else, for $175, are you going to get two dinners, two breakfasts, a lunch, and at least five cooking lessons at a facility like the incomparable Asilomar? Oh, and an apron, a Victorinix boning knife and a corkscrew to take home, not to mention an apple pie and a pumpkin pie, freshly baked, with your own fingerprints in the crust?

There were 10 of us in the class. There was an Iranian couple, an Indian couple, and a Russian couple in the mix which made for lively conversation at dinner. We were the only locals, with the others coming from as far away as San Francisco and Sacramento.

Our first lesson (involving both the apron and the boning knife) was “how to bone out a duck.” Those filet knives are sharp! With varying degrees of success – and no thumbs in their project — we boned and then turned our ducks over to the chef so he could prepare our dinner of duck confit.

We adjourned to another room for our lesson on mushrooms from Mike The Mushroom Man, a native Italian mushroom broker with a great personality, also known as The Fun-gi (you have to say it out loud to get the joke). He brought with him a case of interesting mushrooms ranging from the everyday LBM through chantarelles to mitsutake and some that cost as much as $50 a pound – wholesale. A little butter, a little garlic, and wow.

I have to admit that Her Editorness was way ahead of me on this one – she loves mushrooms sauteed in butter with fresh lemon and threatens to whack my knuckles with a wooden spoon if I try to take them off the fire before the butter is caramelized.

We had a little wine lesson, and then on to the autumn vegetable lesson. There were people in our class of 10 who did not know about spaghetti squash! We learned all about kale, autumn root vegetables and various squash and wonderful ways to cook them. Once again, there were people in the group who had never had collard greens, either. Here are some of the recipes the Asilomar chefs prepared for us and were gracious enough to share:

Cook in stems and ribs in boiling water for 10 min or until tender, drain , set aside
Cook bacon in skillet until beginning to crisp
Add onions and cook about 5 min
Add kale and cook for 10 min
Lower heat and cover, cook for 10 min
Add vinegar, and cook 2 min
Taste and season

Now when I saw this next vegetable laid out on the platter before the chef began his lesson, I felt as if I were at home. Or at least at the firehouse. Rapini looks like mustard greens, which we used to gather in the orchards near the firehouse at Station 15, and wash up and steam. My fellow firehouse cooks out there who watch my website for recipes for the guys might want to notice this one. Mustard greens are free certain times of the year, unlike rapini (if you can find it!).

Broccoli and Rapini with Lemon and Shallots
12 servings

Here comes the spaghetti squash. I hope there’s no one out there who hasn’t tried them. They are one of my favorites, and I’ve even been known to serve them in the shell with spaghetti sauce – saves on dish washing afterward. Firehouse cooks, allow half a squash per guy.

Pierce squash all over (about 1 inch deep) with small knife to prevent bursting
Microwave on high for 6-7 min
Turn over and cook for 8-10 more min or until soft
Let cool for 10 min
Carefully squash in half, it will give off steam
Remove and discard seeds
Using a fork scrape out inside into bowl
Heat butter and add garlic
Toss squash in garlic butter
Taste and season

Now, it doesn’t say in the recipe that you have to be from the South (like Her Editorness – where do you think she got that double Southern name, Marge Ann?) to like collard greens. And as it says in the recipe, you can use other kinds of greens, too.

Bring water with ham hock in it to a boil, skimming any froth
Simmer for 1 hour
Add greens, pepper, and vinegar
Simmer for about an hour
Remove ham hock from liquid and allow to cool
Pick meat off hock and stir back into green if desired
Taste and season

This time of year, you’ve probably noticed kabocha squash at the grocery store. To some, they are mud-ugly, as we used to say on the ranch, because they’re sort of blue and what other food, besides blueberries, is blue? But boy are they good.

Heat oven to 375
Combine spices, sugar, and salt
Mix with oil and toss squash
Bake for 25-30 min or until soft
Taste and season

There were a couple of potato recipes, too, but we have to save room for another story. Next time I’ll tell you about the main dishes we were served – pork chops, poached fish…and the exciting Adventure of 10 Cooks Making Pie Crust. Hopefully we’ll get to that before the Christmas column so you can make perfect crusts, too, for the holidays.

Congratulations to Asilomar for a successful program that involves local chefs and cooks (and students), and Happy 100th Birthday! 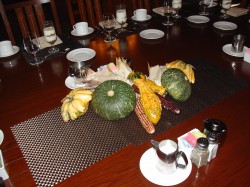 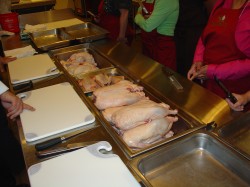 Ducks lined up for our lesson on how to cut them apart. 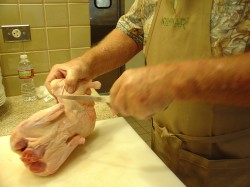 Me, finding the proper joint with my ever so sharp filet knife 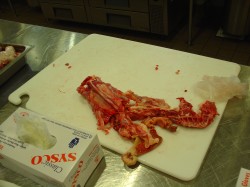 The rest went into the confit. 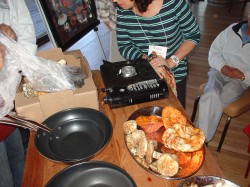 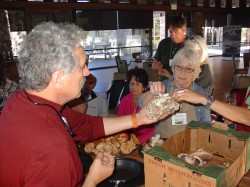 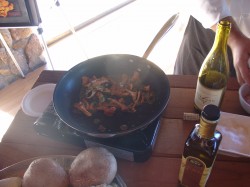 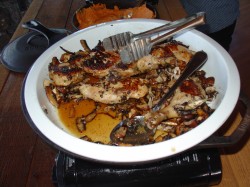 They were so good! 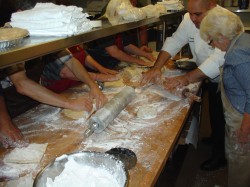 The class learns how to make the perfect pie crust. 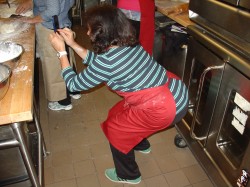