When you leave the door open on your motorcycle museum, you have to be prepared for whatever rolls in the door. A few weeks ago, a guy from Pacific Grove stopped in and took me aside. Seems he’d remarried, and the new wife doesn’t like his motorcycle. Not that she’s against BMWs per se, it’s that it was taking up her garage parking spot. So he was off on his honeymoon and wanted a place to safely store his bimmer. When I heard what it was, I agreed. It’s a 1983 R100RS, the last of its series. See, I have 1977 R100RS, the first of the series. Now all I have to do is get mine down there to the museum and they’ll make great bookends. Mine survived the 1989 Loma Prieta earthquake with only minor damage to the fairing — it was safely on its center stand, the earthquake laid it on its side. It’s one of my favorites and I’m hesitant to drain the gas and put it in the museum, but the rainy season is coming so I just might. 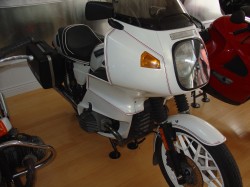 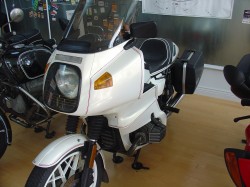 Orphan of a 2nd marriage

Then Cheryl Kampe came by with her camera — as many people have — but in her case she was photographing in order to be able to paint. A very talented watercolorist, Cheryl has done a series she calls “Cycles, Saddles and Chrome.” The paintings are hanging in the museum for all to enjoy, and they’re for sale.

We’re at 34 vehicles last time I counted. I think they might be reproducing in the dark, but they make people happy so who cares? We’ve hired a regular window washer to keep up with the nose prints on the windows from people peering in. We’re still making plans for showing movies and DVDs when the weather gets nasty.